Design a site like this with WordPress.com
Get started
Skip to content
grassrootlevel Uncategorized April 2, 2019April 2, 2019 4 Minutes

Most of us have experienced World War II (WWII) only through the pages of history and cinematic renditions. Whether it is the Invasion of Normandy scene from Saving Private Ryan or the helplessness of Jews as rendered in The Diary of Anne Frank, the horrors of WWII (1939-1945) are etched in our memory. In those dreadful six years, the world witnessed every emotion one can go through—fear, anger, sorrow, hope, and eventually, happiness.

The war wasn’t just about absolute power, it was also about discerning human limitations and a test of man’s willpower. In this feature, Soulveda is turning the wheel of time to relook at the period through some of the popular symbols, each representing a stage of WWII and triumph of the human spirit.

Swastika, the symbol of fear

Swastika, a Sanskrit word that means “good fortune”, has a history that dates back to 5000 years. To this day, the motif is seen as a symbol of divinity by Hindus, Buddhists and Jains. During the mid-nineteenth century, the symbol rose to popularity when a German archaeologist Heinrich Schliemann discovered the hooked cross on the site of ancient Troy. From that time onwards, the symbol was linked to the Aryan race that was seen as ‘superior’ to others. 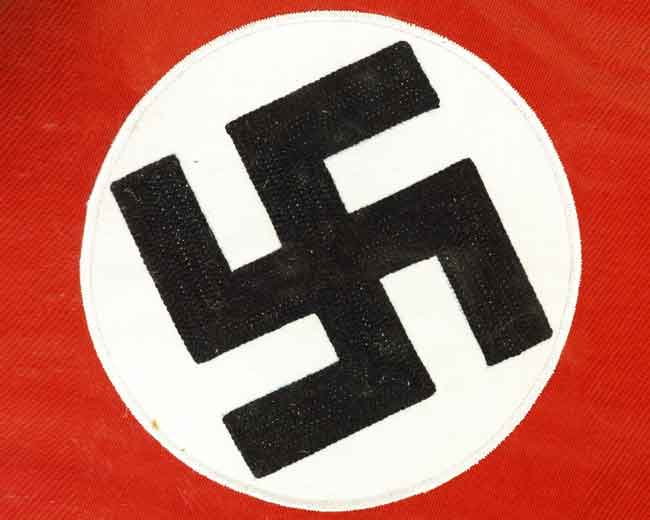 In the 1930s, during the rise of Nazi power, Hitler adopted swastika as the emblem of his party. In Mein Kampf, Adolf Hitler wrote: “I myself, meanwhile, after innumerable attempts, had laid down a final form; a flag with a red background, a white disk, and a black swastika in the middle.” When Hitler became the dictator of Germany, he emblazoned every street, building, products with swastika. His plan was to colour whole Europe in red with the symbol of fear. As he expanded his territory outside Germany, innocent people were thrown out of their house; many were sent to concentration camps; others were killed mercilessly. Even those who were far from Hitler’s reach feared the same fate. They knew he was coming, with his treacherous army and swastika.

Yellow Star, the symbol of horror

WWII was a nightmare for the innocent people who wanted nothing but peace and harmony in their lives. But if there is one race that suffered the most during the war, it was the Jews. With the number of civilian casualties running in to millions, the European population of Jews was reduced to fringes by the Third Reich. It started with the decree that they must wear a yellow star—a six-sided star, in an armband, with the word Jew inscribed on it. 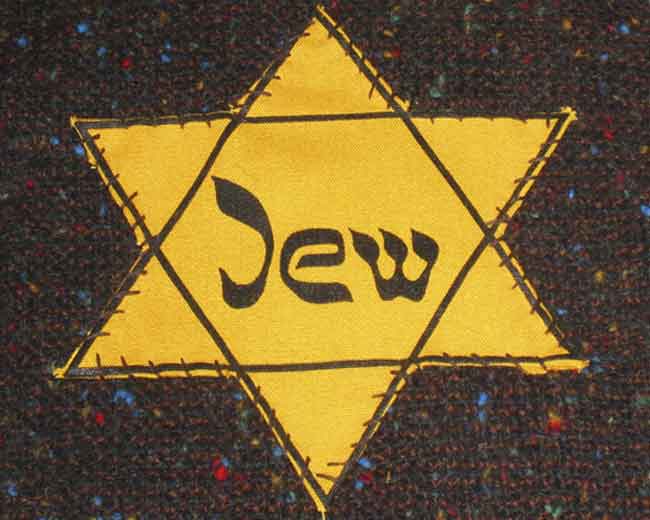 This was their systematic plan to persecute and destroy the Jewish population of Europe. According to the law, all Jews over the age of 10 were forced to wear that star on the armband. Poland, Croatia, Austria, Belgium, Netherlands, Romania—in all the countries where the Nazi flag flew, the law was imposed on the Jews. After their segregation, the Jews were transferred to ghettos and from there to the death camps, where they continued to wear the star till their last breath.

Red circle, the symbol of death

By late 1944, the tide of war was against the Empire of Japan. Their enemy, the United States had become an industrial superpower; a force they were not equipped to deal with. In desperation, Japanese military leaders created a suicide unit called Kamikaze, comprising young soldiers who were instructed to nose-dive their planes into the warships. 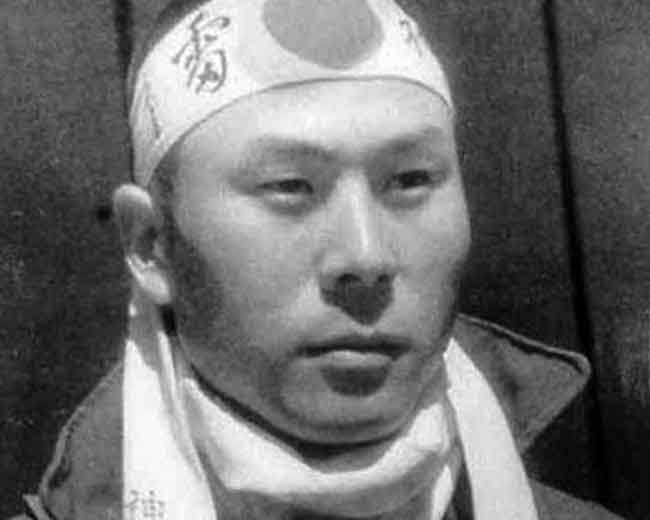 Teenagers and young adults who were still under training were ‘asked’ to volunteer for the Kamikaze unit. With jets full of explosives, the Kamikaze pilots attacked the American fleet in October 1944. The pilots were expected not only to embrace death for the sake of the emperor but also to cause large scale destruction at the enemy’s end. Kamikaze pilots had a tradition to wear a white headband with a red circle inscribed it. This band became the symbol of death in the Pacific.

V, the symbol of victory

Winston Churchill, the British Prime Minister (1940–45, 1951–55) ushered England to victory in WWII, when his country stood alone to face the Third Reich that had crippled Europe. It was the darkest hour for civilians and brave soldiers alike, who feared for their freedom and safety. Germany initiated “Operation Sealion”, a cross-channel invasion of south-east England during mid-1940. In August, German air-force Luftwaffe launched an attack to establish air superiority over England. A local newspaper vendor in London is reported to have said: “Well, we’re in the final, and it’s on the home ground.” 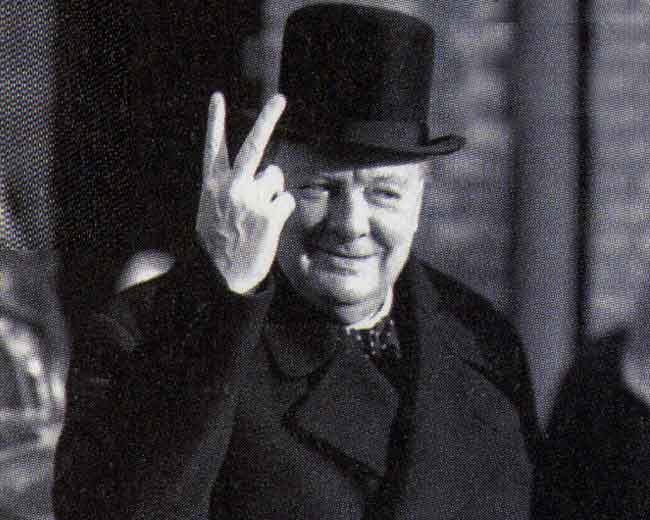 Germany underestimated their enemy, especially their resolution to fight back. Luftwaffe suffered heavy losses in the battle that eventually compelled Hitler to postpone Operation Sealion indefinitely. Churchill saw this victory as an opportunity to bolster the spirit of his fellow citizens. His hand gesture of V—which meant victory—became the source of inspiration for everyone. Not just England, but people from around the European continent were now looking up to Churchill to liberate Europe from Hitler. His V gesture was his promise to everyone that he will fight in the fields, in the streets, in hills, and that he will not surrender—as he famously said in the House of Commons while referring to the Dunkirk evacuation.

Origami Crane, a symbol of hope

Whether it was the allied or the axis power, it was the innocent citizens of every country who paid the price of the war. People prayed to every God they believed in for the end of this gruesome period. Sadako Sasaki was one such girl who prayed for her life after she was diagnosed with leukaemia, a terminal illness she got from the Hiroshima atomic explosion. Sadako was two years old when the US dropped the atomic bomb in Hiroshima. As a result, countless children like Sadako contracted the illness after being exposed to heavy radiation. 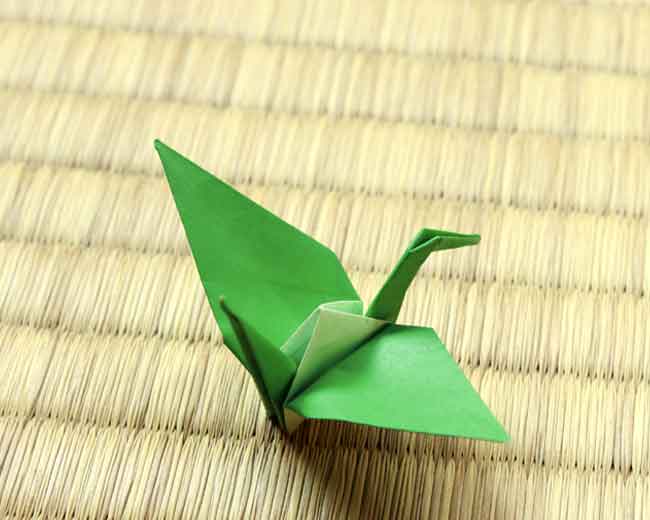 Doctors had lost all hope but the young girl wasn’t ready to die. She believed in the Japanese legend that anyone who folds a 1000 origami cranes, gets a wish granted. So, she began making those origami cranes in the hope of being granted her wish to live. Sadako had made 644 cranes before she breathed her last. Her story became the source of hope and peace across the nation, something Japan needed desperately after the war. In 1958, a statue of Sadako holding a golden crane was unveiled at the Hiroshima Peace Memorial Park. Her plaque reads: “This is our cry. This is our prayer. Peace on Earth.”