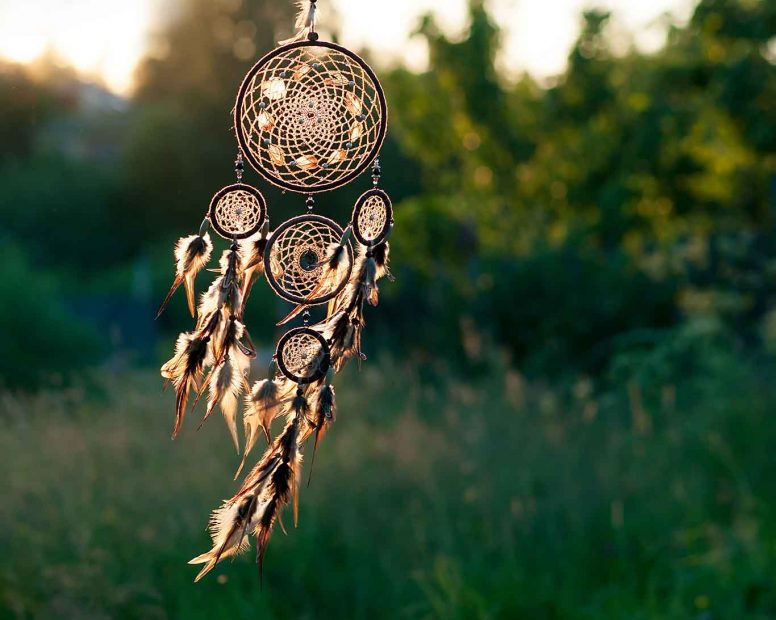 A delicate hoop, made of plastic or willow wood, woven with a web of yarn, adorned with colourful beads or feathers, is commonplace these days. Often found hanging on a wall or from tree branches, these intricate things are now part of contemporary cultures, and not just confined to closed tribal communities. Ever since I saw a dreamcatcher in a trinket store, I dug deep into its origin and legends only to become fascinated by the mystical tradition they represent. Here’s how the legends unfolded in my curious mind.

Many moons ago, before the Europeans colonised America, the native American tribes Ojibwe and Lakota were fascinated with spiders. They believed that spiders protected them from bad omens. Ojibwe people often spoke of a spider woman called Asibikaashi, who possessed mystical powers. She was believed to be the protector of people, especially children.
Over time, as the tribe migrated to far off lands, Asibikaashi found it difficult to cast her protective spell on her children. She, then, created a talisman—the first dreamcatcher. Called asabikeshiinh by the natives, the word literally means ‘spider’ in English. And soon after, grandmothers and mothers started making dreamcatchers to keep their young ones safe.

Also called ‘Sacred Hoops’, dreamcatchers were known to protect people from bad dreams and evil forces, while asleep. Ojibwe people believed, at night air is laden with dreams—both good and bad. When a dreamcatcher is hung above a bed, dreams get trapped in its web. The good dreams pass through its feathers and descend upon the sleeper. Bad dreams remain entangled in the net, only to evaporate the next morning like dew drops on the grass.

When Iktomi was done weaving, it handed the hoop to the old man, explaining to him that the web was a perfect circle with a hole in the centre, which could help him and his people fulfil their dreams.

A dreamcatcher may have been created as a talisman to protect children from nightmares, but it soon became an instrument to guide grown-ups. Author Bob Anderson narrates a well-known legend about the Lakota tribe in his book Grandfather Speaks Again. The legend goes something like this: A long time ago, when an old Lakota spiritual leader was up in the mountains, he had a vision wherein Iktomi, a sacred spider spirit, appeared in front of him. It spoke to him in a sacred language which only he could understand. As it spoke, Iktomi took a willow hoop from him and began to weave a web across it. It spoke not only of the cyclical stages of life (infancy, childhood, adulthood and old age) but also of the good and bad forces people encounter in their lives. It went on to explain that when people listen to the good forces, they are steered in the right direction. But, when they listen to the bad ones, they are steered in the wrong direction. When Iktomi was done weaving, it handed the hoop to the old man, explaining to him that the web was a perfect circle with a hole in the centre, which could help him and his people fulfil their dreams. The web would catch the good ideas and the bad ones would go through the hole.

As interesting as these legends are, I must confess that the idea of hanging a dreamcatcher that could eliminate evil dreams seems implausible to me. This being said, what dreamcatchers stand for certainly seems profound. And the legends they carry with them have lessons and insights to learn from. To me, they teach two things—one, we are all capable of conjuring up both good and bad dreams consciously, and two, instead of harping on our evil dreams and nightmarish fears, we ought to nurture our hopes and passions. As author G W Mullins (of native American descent) writes in his book Walking with Spirits Native American Myths, Legends, And Folklore: “Dreams are not just for the young. They are for children of all ages. To dream is to live, without dreams, we will cease to live and merely exist.”