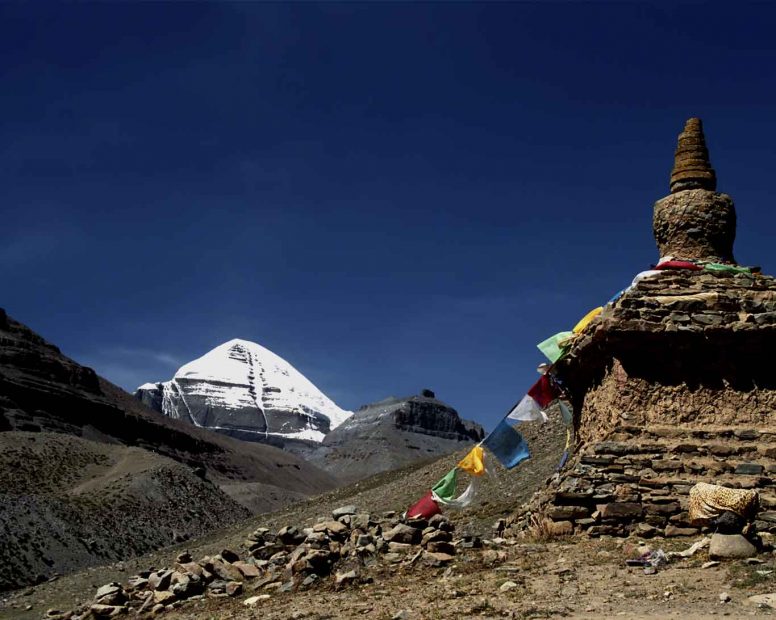 Being around the mountains is a humbling experience. Their grandiose peaks remind us of our own miniscule, fleeting existence. They, thereby, urge us to embrace our lives, value others and respect the very ground we stand on. They instil in us, a sense of spirituality. Perhaps that is why, mountain ranges are preferred destinations of sages and pilgrims to undergo spiritual enhancement and to attain enlightenment.

Of several mountain ranges, the Kailash has been deemed sacred by multiple faiths since ancient times. Believed to be the axis mundi (cosmic axis), Kailash is regarded as the celestial pole that connects the earth and the sky. It is supposedly here that the four compass directions merge, thus establishing a connection between the physical and the metaphysical realms. Not surprisingly, this mountain range is surrounded by several inexplicable mysteries. In this article, Soulveda explores a few of them.

“No mortal ever be allowed to walk atop Mount Kailash, where, among the clouds, is the abode of the gods. He who dares to start the top of Mount holy and see the faces of the gods will be put to death!” goes an ancient Tibetan warning. But, despite the warning, history indicates that several mountaineers attempted to scale Kailash, to reach its summit in the early 1900s, only to have their ambitions thwarted. Colonel R C Wilson was a mountaineer who was determined to climb Mount Kailash. But according to his article in the Alpine Journal, just when he discovered an easy pathway to the summit of the mountain, heavy snow began to fall, making the ascent impossible.

A few years later, yet another climber Herbert Tichy attempted to climb Kailash. But according to the book The sacred mountain: The complete guide to Tibet’s mount Kailas by John Snelling and the 14th Dalai Lama, when Tichy was seeking permission, he was told, “Only a man entirely free of sin could climb Kailash. And he wouldn’t have to actually scale the sheer walls of ice to do it—he’d just turn himself into a bird and fly to the summit.”

As of today, Mount Everest in the Himalayan range—the world’s tallest peak—has been scaled several times by mountaineers. Kailash, on the other hand, which is relatively a smaller peak, remains unconquered.

He further writes that it is impossible for an ordinary person to reach Shambala for there are poisonous streams and gases. And those who do, vanish forever, never to return.

Many researchers speculate that the shape of Kailash is too precise to be formed by natural phenomena. And one hypothesis is that Kailash could be the mankind’s largest known pyramid, part of a hundred-pyramidal-complex. This idea probably sprung forth because the Egyptian word ‘Mer’ often refers to a monument of great importance, usually a pyramid. And incidentally, Mount Kailash is also referred to as Mount ‘Meru’.

Author Davinder Bhasin has collated several researchers’ findings in his book An Audience with God at Mount Kailash: A True Story. He writes that since the mountain takes a pyramidal shape and adheres to the rules of Vastu Shastra, it could very well be a man-made monument. He further suggests that Kailash pyramid could be at the centre of other mysterious monuments such as the Stonehenge, and the pyramids of Egypt and South America, and that they could be interconnected by underground tunnels. In fact, according to him, research indicates that the Great Sphinx of Giza (a lioness with a pharaoh’s head which protects underground tunnels) faces Mount Kailash, as if protecting a secret passageway.

According to ancient Hindu and Tibetan Buddhist texts, the region just north of Tibet in and around Mount Kailash is where a mythical city called Shambala lies. It is believed to be a spiritual city which connects the physical realm with the metaphysical realm. Protected by unknown forces of energy, this is where super-humans supposedly reside (in deep meditation), guarding a great secret.

Whether Shambala really exists, is unknown. Russian theosophist and philosopher Nicholas Roerich was one of the many people who was convinced of its existence. In his book Shambhala: In Search of the New Era, Roerich writes, “Verily, verily, the people of Shambala at times emerge into the world. They meet the earthly co-workers of Shambala. For the sake of humanity, they send out precious gifts, remarkable relics.” He further writes that it is impossible for an ordinary person to reach Shambala for there are poisonous streams and gases. And those who do, vanish forever, never to return. According to Roerich, “Only few of them reach the holy place, and only if their karma is ready.”

The Kailash Manasarovar lake shaped like the sun is among the world’s highest freshwater lakes. Its water tastes sweet and pilgrims believe the lake is sacred. Adjacent to it, Lake Rakshastal, on the contrary, is shaped like a crescent moon and is among the world’s highest saltwater lakes. The lake is believed to be evil. Just like Mount Kailash, the two lakes—Manasarovar and Rakshastal—are considered sacred in several faiths. They are said to represent the duality of creation—the good and bad, the solar and lunar forces, and the positive and the negative energy respectively.

Here is the interesting part: the two lakes are located right next to each other, divided only by a thin isthmus. However, Lake Manasarovar remains placid and calm all year round whereas Rakshastal stays constantly turbulent and stormy. What’s more, several pilgrims have reported that Manasarovar gets illuminated by mysterious dots of light at night. And as of today, no one can be sure of what the lights are, or how they are caused.