Folk music is much more than just a genre of music. It’s a bridge that connects the past of a culture to its present; it’s that subset of art which effortlessly sets people free and the glue that holds them together; it’s a language that is understood by all.

Folk music unleashes the kind of energy that lifts the spirits, warms the heart, and inspires joy at every instance it’s heard. These traditional songs turn back the clock every time a folk musician takes the centre stage. And a name that instantly comes to mind is Mame Khan, whose warm, cheerful, reverberating voice has made him a household name. Belonging to the colourful community of Manganiyar, whose music transcends time and place, Khan has exposed an entire generation of young music lovers to the rich and vibrant sound of folk music.

In an exclusive conversation with Soulveda, the artiste talks about his passion for folk music, the Manganiyar, and his cultural roots.

You come from a family of singers which has breathed folk music for more than 15 generations. Tell us how your heritage has driven your passion for folk music?

I think I am very lucky to be part of one of the last few generations in India who spent their childhood without TV and video games. In my village where I grew up, I was surrounded by sand dunes and music. Growing up in a musician community, music was part of my daily life, especially since my late father Ustad Rana Khan was an inspiration to me every single day. Seeing him travel the country, coming home with new stories about music and the roots of our tradition inspired me to carry on the legacy of my father and community.

Folk music, which is all about pure vocals and raw sounds, has flourished for thousands of years. What is its place in times of electronic music?

If you ask me about the Manganiyar folk music, I would not say the music is about pure vocals and raw sounds only. In fact, our singing style can almost be called semiclassical and the sounds of our signature instruments such as the Kamaycha and Sarangi are very versatile and complex. Our music is so much about rhythm, and so is electronic music. I think there is no competition between genres. Even I create a lot of fusion with new sounds and a more modern structure. Change is good, but without forgetting your roots.

I cannot speak for folk music in general, but I can speak for my music. I feel there is no compulsion to change or adapt the music in a drastic way. Some elements of our music are just timeless, and some can be changed. For example, I often change the tempo of my new compositions, which gives a new feeling, but the beauty of the original folk composition remains.

Exposure to music at a young age helps one evolve and adds more dimensions to one’s personality. Do you encourage children to sing or perform, considering your musical inclination was nurtured the same way?

There is an entire generation of Manganiyar children, hungry to perform, ready to sing and play. I especially have a very young band to encourage all new talent to come forward to practice and play.

Belonging to the Manganiyar community, you sing in praise of the Hindu deities, your music is an amalgam of elements from different cultures. What role does this play in harmonising the inter-cultural relationships in today’s social climate?

I think our community can be seen as a good example of tolerance. Belonging to the Muslim faith, we do sing in praise of the Hindu gods as well. Music speaks one language and I will be glad if music can connect people. But at the same time, music cannot replace the role of responsible politics and good governance.

Tell us about your collaboration with an initiative like Fakiri. What brings about this artistic relationship?

Fakiri, to me, is a ‘soul project’ and I know this is true also for the people behind it. Fakiri is a platform where music can be experienced in its original form without any boundaries. The artistic collaborations they bring on one single stage is true to its concept. I am really looking forward to our concert. 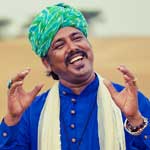 Mame Khan is a Rajasthan-based contemporary folk artiste from the Manganiyar community known for a unique oral tradition of storytelling through folk, devotional songs. From a small village in Rajasthan, Mame Khan and his band of Manganiyar musicians have reached national and international music platforms.
Advertisement